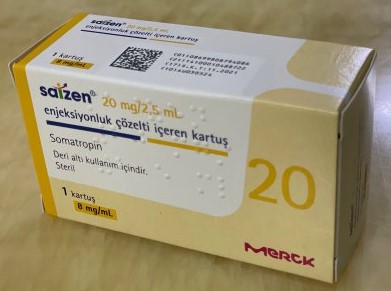 Your doctor may start you on a low dose of somatropin and may gradually increase your dose.

You may receive your first dose of somatropin injection in your doctor’s office or your doctor may allow you or a caregiver to perform the injections at home. Before you use somatropin injection for the first time, you or the person who will be giving the injections should read the manufacturer’s information for the patient that comes with it. These instructions describe how to inject a dose of somatropin. Be sure that you understand these directions. Ask your healthcare provider if you have any questions about how or where to inject the medication or how to dispose of used needles and syringes after you inject the medication.

Always look at somatropin solution before injecting it. Check that the expiration date has not passed and that the liquid is clear and colorless. The liquid should not contain visible particles. Do not use if it is expired or if the liquid is cloudy or contains particles.

Ask your pharmacist or doctor for a copy of the manufacturer’s information for the patient.

This medication may be prescribed for other uses; ask your doctor or pharmacist for more information.

Unless your doctor tells you otherwise, continue your normal diet.

Somatropin may cause side effects. Tell your doctor if any of these symptoms are severe or do not go away:

Some side effects can be serious. If you experience any of these symptoms, stop taking and call your doctor immediately or get emergency medical treatment:

Somatropin may increase the risk of developing certain types of cancer, including brain or skin cancer. Call your doctor right away if you have any of the following symptoms: changes in behavior or vision; headaches; or changes in moles, birthmarks, or skin color.

Somatropin may cause other side effects. Call your doctor if you have any unusual problems while taking this medication.

If you experience a serious side effect, you or your doctor may send a report to the Food and Drug Administration’s (FDA) MedWatch Adverse Event Reporting program online (http://www.fda.gov/Safety/MedWatch) or by phone (1-800-332-1088).

It is important to keep all medication out of sight and reach of children as many containers (such as weekly pill minders and those for eye drops, creams, patches, and inhalers) are not child-resistant and young children can open them easily. To protect young children from poisoning, always lock safety caps and immediately place the medication in a safe location – one that is up and away and out of their sight and reach. http://www.upandaway.org

Unneeded medications should be disposed of in special ways to ensure that pets, children, and other people cannot consume them. However, you should not flush this medication down the toilet. Instead, the best way to dispose of your medication is through a medicine take-back program. Talk to your pharmacist or contact your local garbage/recycling department to learn about take-back programs in your community. See the FDA’s Safe Disposal of Medicines website (http://goo.gl/c4Rm4p) for more information if you do not have access to a take-back program.

In case of overdose, call the poison control helpline at 1-800-222-1222. Information is also available online at https://www.poisonhelp.org/help. If the victim has collapsed, had a seizure, has trouble breathing, or can’t be awakened, immediately call emergency services at 911.

Symptoms of overdose may include:

Keep all appointments with your doctor and the laboratory. Your doctor may order certain lab tests to check your body’s response to somatropin.

It is important for you to keep a written list of all of the prescription and nonprescription (over-the-counter) medicines you are taking, as well as any products such as vitamins, minerals, or other dietary supplements. You should bring this list with you each time you visit a doctor or if you are admitted to a hospital. It is also important information to carry with you in case of emergencies.