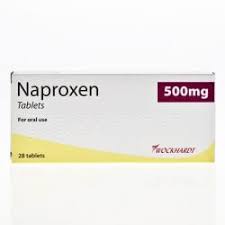 People who take nonsteroidal anti-inflammatory drugs (NSAIDs) (other than aspirin) such as naproxen may have a higher risk of having a heart attack or a stroke than people who do not take these medications. These events may happen without warning and may cause death. This risk may be higher for people who take NSAIDs for a long time. Do not take an NSAID such as naproxen if you have recently had a heart attack, unless directed to do so by your doctor. Tell your doctor if you or anyone in your family has or has ever had heart disease, a heart attack, or a stroke, if you smoke, and if you have or have ever had high cholesterol, high blood pressure, or diabetes. Get emergency medical help right away if you experience any of the following symptoms: chest pain, shortness of breath, weakness in one part or side of the body, or slurred speech.

If you will be undergoing a coronary artery bypass graft (CABG; a type of heart surgery), you should not take naproxen right before or right after the surgery.

NSAIDs such as naproxen may cause ulcers, bleeding, or holes in the stomach or intestine. These problems may develop at any time during treatment, may happen without warning symptoms, and may cause death. The risk may be higher for people who take NSAIDs for a long time, are older in age, have poor health, or who drink three or more alcoholic drinks per day while taking naproxen. Tell your doctor if you take any of the following medications: anticoagulants (”blood thinners”) such as warfarin (Coumadin, Jantoven); aspirin; other NSAIDs such as ibuprofen (Advil, Motrin) and ketoprofen; oral steroids such as dexamethasone, methylprednisolone (Medrol), and prednisone (Rayos); selective serotonin reuptake inhibitors (SSRIs) such as citalopram (Celexa), fluoxetine (Prozac, Sarafem, Selfemra, in Symbyax), fluvoxamine (Luvox), paroxetine (Brisdelle, Paxil, Pexeva), and sertraline (Zoloft); or serotonin norepinephrine reuptake inhibitors (SNRIs) such as desvenlafaxine (Khedezla, Pristiq), duloxetine (Cymbalta), and venlafaxine (Effexor XR). Also tell your doctor if you have or have ever had ulcers, bleeding in your stomach or intestines, or other bleeding disorders. If you experience any of the following symptoms, stop taking naproxen and call your doctor: stomach pain, heartburn, vomit that is bloody or looks like coffee grounds, blood in the stool, or black and tarry stools.

Keep all appointments with your doctor and the laboratory. Your doctor will monitor your symptoms carefully and will probably order certain tests to check your body’s response to naproxen. Be sure to tell your doctor how you are feeling so that your doctor can prescribe the right amount of medication to treat your condition with the lowest risk of serious side effects.

Your doctor or pharmacist will give you the manufacturer’s patient information sheet (Medication Guide) when you begin treatment with prescription naproxen and each time you refill your prescription. Read the information carefully and ask your doctor or pharmacist if you have any questions. You can also visit the Food and Drug Administration (FDA) website (http://www.fda.gov/Drugs/DrugSafety/ucm085729.htm) or the manufacturer’s website to obtain the Medication Guide.

Prescription naproxen is used to relieve pain, tenderness, swelling, and stiffness caused by osteoarthritis (arthritis caused by a breakdown of the lining of the joints), rheumatoid arthritis (arthritis caused by swelling of the lining of the joints), juvenile arthritis (a form of joint disease in children), and ankylosing spondylitis (arthritis that mainly affects the spine). Prescription naproxen tablets, extended-release tablets, and suspension are also used to relieve shoulder pain caused by bursitis (inflammation of a fluid-filled sac in the shoulder joint), tendinitis (inflammation of the tissue that connects muscle to bone), gouty arthritis (attacks of joint pain caused by a build-up of certain substances in the joints), and pain from other causes, including menstrual pain (pain that happens before or during a menstrual period). Nonprescription naproxen is used to reduce fever and to relieve mild pain from headaches, muscle aches, arthritis, menstrual periods, the common cold, toothaches, and backaches. Naproxen is in a class of medications called NSAIDs. It works by stopping the body’s production of a substance that causes pain, fever, and inflammation.

Follow the directions on the package or prescription label carefully, and ask your doctor or pharmacist to explain any part you do not understand. Take naproxen exactly as directed. Do not take more or less of it or take it more often than prescribed by your doctor or written on the package.

Shake the liquid well before each use to mix the medication evenly. Use the measuring cup provided to measure each dose of the liquid.

If you are taking naproxen to relieve the symptoms of arthritis, your symptoms may begin to improve within 1 week. It may take 2 weeks or longer for you to feel the full benefit of the medication.

Stop taking nonprescription naproxen and call your doctor if your symptoms get worse, you develop new or unexpected symptoms, the part of your body that was painful becomes red or swollen, your pain lasts for more than 10 days, or your fever lasts for more than 3 days.

This medication is sometimes prescribed for other uses; ask your doctor or pharmacist for more information.

Unless your doctor tells you otherwise, continue your normal diet.

Take the missed dose as soon as you remember it. However, if it is almost time for the next dose, skip the missed dose and continue your regular dosing schedule. Do not take a double dose to make up for a missed one.

Naproxen may cause side effects. Tell your doctor if any of these symptoms are severe or do not go away:

Some side effects can be serious. If you experience any of the following symptoms, or those mentioned in the IMPORTANT WARNING section, call your doctor immediately. Do not take any more naproxen until you speak to your doctor:

Naproxen may cause other side effects. Call your doctor if you have any unusual problems while taking this medication.

If you experience a serious side effect, you or your doctor may send a report to the Food and Drug Administration’s (FDA) MedWatch Adverse Event Reporting program online (http://www.fda.gov/Safety/MedWatch) or by phone (1-800-332-1088).

Keep this medication in the container it came in, tightly closed, and out of reach of children. Store it at room temperature and away from excess heat and moisture (not in the bathroom).

Unneeded medications should be disposed of in special ways to ensure that pets, children, and other people cannot consume them. However, you should not flush this medication down the toilet. Instead, the best way to dispose of your medication is through a medicine take-back program. Talk to your pharmacist or contact your local garbage/recycling department to learn about take-back programs in your community. See the FDA’s Safe Disposal of Medicines website (http://goo.gl/c4Rm4p) for more information if you do not have access to a take-back program.

It is important to keep all medication out of sight and reach of children as many containers (such as weekly pill minders and those for eye drops, creams, patches, and inhalers) are not child-resistant and young children can open them easily. To protect young children from poisoning, always lock safety caps and immediately place the medication in a safe location – one that is up and away and out of their sight and reach. http://www.upandaway.org

In case of overdose, call the poison control helpline at 1-800-222-1222. Information is also available online at https://www.poisonhelp.org/help. If the victim has collapsed, had a seizure, has trouble breathing, or can’t be awakened, immediately call emergency services at 911.

Symptoms of overdose may include the following:

Before having any laboratory test, tell your doctor and the laboratory personnel that you are taking naproxen.

If you are taking prescription naproxen, do not let anyone else take your medication. Ask your pharmacist any questions you have about refilling your prescription.

It is important for you to keep a written list of all of the prescription and nonprescription (over-the-counter) medicines you are taking, as well as any products such as vitamins, minerals, or other dietary supplements. You should bring this list with you each time you visit a doctor or if you are admitted to a hospital. It is also important information to carry with you in case of emergencies.