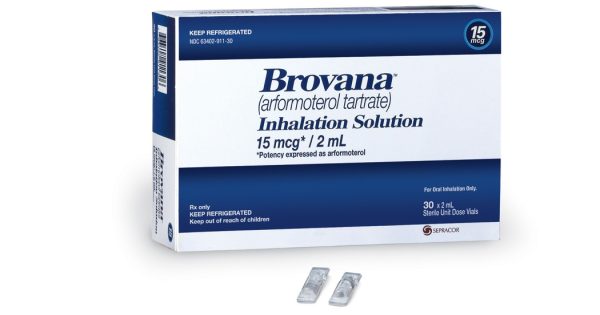 Compared to patients who did not take the medicine, more people who used an asthma medication identical to arformoterol had more severe asthma attacks that required hospital treatment or resulted in death. Arformoterol inhalation use may raise a person’s risk of developing severe asthma issues or passing away. The Food and Drug Administration (FDA) has not given arformoterol its approval to treat asthma. There is insufficient data to determine whether arformoterol raises mortality risk in those with chronic obstructive pulmonary disease (COPD; a group of lung diseases, which includes chronic bronchitis and emphysema).

You will get the manufacturer’s patient information sheet (Medication Guide) from your doctor or pharmacist when you start taking arformoterol and each time you refill your prescription. If you have any questions, carefully read the material and contact your doctor or pharmacist. The Medication Guide is also available on the manufacturer’s website or the Food and Drug Administration (FDA) website.

Discuss the dangers of using arformoterol inhalation with your doctor.

Wheezing, shortness of breath, coughing, and chest tightness brought on by chronic obstructive pulmonary disease are managed by arformoterol inhalation (COPD; a group of lung diseases, which includes chronic bronchitis and emphysema). Arformoterol belongs to a group of drugs known as long-acting beta agonists (LABAs). Breathing becomes simpler as a result of the lungs’ opening and relaxation.

Arformoterol is available as a solution (liquid) for oral inhalation through a nebulizer (machine that turns medication into a mist that can be inhaled). Typically, it is breathed in twice daily, in the morning and in the evening. Arformoterol should be inhaled at around the same times each day, with dosages spaced about 12 hours apart. Ask your doctor or pharmacist to explain any instructions on your prescription label that you are unsure about following. As recommended, take arformoterol. Use it only as directed by your doctor, neither more nor less often.

Arformoterol inhalation should not be injected or swallowed.

Arformoterol should not be used to treat COPD attacks that come on suddenly. For use during attacks, your doctor will prescribe a short acting beta agonist inhaler such as albuterol (Proventil, Ventolin). Your doctor will likely advise you to cease using this kind of inhaler regularly but to keep using it to treat attacks if you were doing so before starting therapy with arformoterol.

Your condition may be deteriorating if your COPD symptoms worsen, arformoterol inhalation stops working as well, you require higher doses than normal of the medication you take for sudden attacks, or the medication you use for attacks does not reduce your symptoms. Use only the recommended dosage of arformoterol. Contact your physician right away.

Ignore the missed dose and carry on with my normal dosing routine. To make up for a missing dose, do not take a second dose.

Arformoterol could have negative effects. If any of these symptoms are severe or do not go away, let your doctor know right once:

Some adverse effects can be very harmful. Call your doctor right away if any of these symptoms occur to you:

Arformoterol could have other negative effects. If you experience any strange issues while taking this drug, call your doctor right away.

Keep this medication tightly wrapped in the foil pouch it was packaged in and out of the reach of children. Keep the medication out of the sun and heat. The drug can be kept at room temperature for up to six weeks or in the refrigerator until the specified expiration date on the packaging has passed. Any medication that has been kept at room temperature for more than six weeks or that has been taken out of the foil pouch and isn’t being used right away should be thrown away.

Overdose signs could include the following:

Keep all of your doctor’s appointments.

Do not share your medication with anybody else. Any queries you may have regarding medication refills should be directed to your pharmacist.