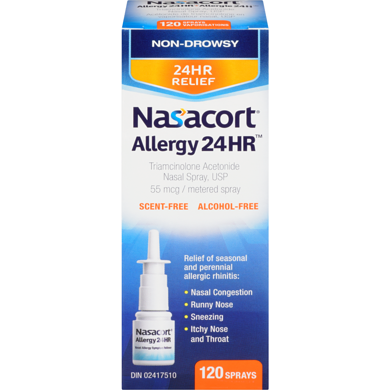 Triamcinolone nasal spray is used to treat symptoms of hay fever and other allergies, such as runny, stuffy, or itchy noses, itchy eyes, and sneezing. Sneezing, stuffy, runny, or itchy nose are just a few examples of symptoms brought on by the common cold that shouldn’t be treated with triamcinolone nasal spray. The drug triamcinolone belongs to the corticosteroid drug class. It functions by preventing the release of specific organic compounds that produce allergic symptoms.

Both on prescription and without, triamcinolone is available as a liquid to spray in the nose. Typically, it is sprayed once daily into each nostril. If you’re an adult, you’ll start your triamcinolone nasal spray treatment with a greater dose and subsequently lower it after your symptoms become better. When administering triamcinolone nasal spray to a child, the dosage will initially be lower and may then be increased if the child’s symptoms do not get better. When the child’s symptoms go better, you’ll reduce the dose. If you have any questions, make sure you carefully follow the instructions on the package or product label and consult your doctor or pharmacist. As recommended, apply triamcinolone spray. Use only as suggested on the package label or as your doctor has instructed. Do not use more, less, or more frequently than recommended.

A specific number of sprays are intended to be delivered by the triamcinolone nasal spray. It’s possible that the remaining sprays in the bottle don’t contain the right amount of medication after the designated number of them have been used. Even if the container still has some liquid in it, you should keep note of how many sprays you have used and discard the bottle once you have used the designated amount of sprays.

Ask your doctor or pharmacist for more details if you’re interested in using this drug for any other conditions.

The missed dose should be taken as soon as you remember. If the next dose is soon due, skip the missed one and carry on with your regular dosing plan. To make up for a missing dose, do not take a second one.

Triamcinolone nasal spray may cause side effects. Consult your doctor right away if any of these symptoms are severe or do not go away:

Some adverse effects can be very harmful. Call your doctor and discontinue taking triamcinolone nasal spray if you notice any of these signs:

It’s important to be aware that this drug could slow down a child’s growth. If your kid needs to take this medication for longer than two months each year, consult your child’s doctor.

Other negative effects of triamcinolone are possible. If you experience any strange issues while taking this drug, call your doctor right away.

Keep this medication tightly closed in the original container and out of the reach of children. Store it away from excessive heat and moisture at room temperature (not in the bathroom).

Call your local poison control centre at 1-800-222-1222 if someone has ingested triamcinolone nasal spray. Dial 911 to reach the nearest emergency services if the sufferer has collapsed or has stopped breathing.

The applicator for your triamcinolone nasal spray needs to be cleaned sometimes. In order to remove the applicator from the bottle, you must first remove the cap. The cap and spray nozzle should be given a brief soak in warm water before being rinsed with cold water. Shake or tap the extra water off, then let it air dry. Put the spray nozzle back on the bottle after the cap and nozzle have dried. To see a fine spray, press and release the nozzle repeatedly.

Your bottle may have a blocked nozzle if it won’t spray. Do not attempt to remove the obstruction using pins or other sharp objects. Instead, wash the sprayer in the prescribed manner.

If you have any inquiries regarding triamcinolone nasal spray, ask your pharmacist.